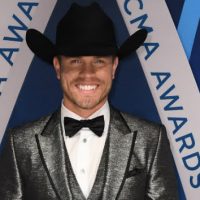 ABC/Image Group LA Dustin Lynch has long proclaimed his love and admiration for Reba McEntire, so it was only fitting that the Country Music Hall of Famer should be the one to officially induct him into the Grand Ole Opry on Tuesday night.

“I know how you feel,” Reba said, as she stepped into the legendary circle of wood transported from the Opry’s former home at the Ryman Auditorium.

“Do you know that 41 years ago yesterday was the first time I got to sing on this stage?” she revealed, as the audience cheered.

Earlier in the evening, Dustin told the audience his Tuesday night performance was the second most nervous he’d ever been on the Opry stage: the first was the night of his debut — March 2, 2012.

After Reba handed him his Opry member trophy, Dustin took a moment to compose himself and share it with his band members, as he recognized each one.

“I told everybody before I came out here, I am a crybaby,” he joked, as the audience laughed. “And I get it from my dad,” he added. “It’s true.”

“I cannot believe what just happened. Reba McEntire just gave me a hug and — wow!” he said, as the audience continued to roar.

Dustin went on to give a shout-out to all the people behind-the-scenes who’ve helped make him a success, before closing with his most recent #1, “Small Town Boy.”

Earlier in the evening, Dustin played a set that included chart-toppers like “Where It’s At,” as well as older songs like “She Cranks My Tractor,” plus his current single, “Good Girl.”

He also sang his breakthrough hit, “Cowboys and Angels,” pointing out it was inspired by the love story of his grandparents, who’ve been married 63 years and were in the audience.