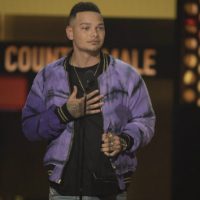 ABC/Image Group LAThe CMA Awards will be held on Wednesday at Nashville’s Bridgestone Arena and the evening will include even more star power.  Today, the names of presenters for the awards show were announced and the list includes a mix of country, film and television talent.

The 52nd Annual CMA Awards will be hosted on Wednesday for the 11th consecutive year by Brad Paisley and Carrie Underwood. The show begins at 8 p.m. ET (7 p.m. CT) on ABC.