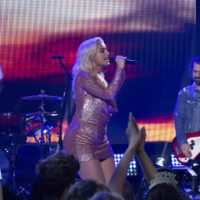 ABC/Kelsey McNeal“Meant to Be,” Florida Georgia Line‘s record-breaking collaboration with Bebe Rexha, is nominated for Single and Musical Event of the Year at Wednesday’s CMA Awards.  While the duo and Bebe have teamed up to perform “Meant to Be” at a number of other awards shows in the past year, FGL’s Brian Kelley says the one they’re doing Wednesday night will be the best yet.

“We’ve got a different type of performance scheduled. We’ve got a little surprise, a little different version of it, but it’s gonna be super-powerful,” Brian tells ABC Radio.

Between the two categories in which the song’s nominated, Tyler Hubbard knows which one he’d rather win: Single of the Year.

“I think that song just deserves some recognition,” he tells ABC Radio. “I think it’d be cool to get up there and share a stage with Bebe — just to share that moment, I think it’d be really special.”

He adds, “That song’s changed our life, all three of our lives, and it’s just unexpected and very, very cool to see what that song’s done this year and how it’s connected with our fans and continued to inspire us.”

Tune in to see which trophies, if any, “Meant to Be” wins when the 52nd Annual CMA Awards air live from Nashville on ABC Wednesday at 8 p.m. ET.