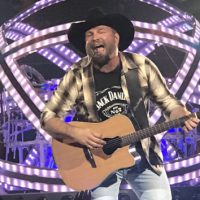 ABC RadioAs Garth Brooks prepares to kick off his Stadium Tour this Saturday in St. Louis, the winningest Entertainer of the Year in CMA history continues to set records.

This weekend’s crowd at The Dome at America’s Center will be the largest ever for any paid event at the venue. The same is true of Garth’s May 18 show at the home of the Pittsburgh Steelers.

Meanwhile, the Garth Brooks Stadium Tour will boast the biggest concert crowd ever during its Phoenix-area stop March 23 at the home of the Arizona Cardinals. The May 3 and 4 dates at the home of the Minnesota Vikings will also be the best-attended musical event in the history of U.S. Bank Stadium.

And now that tickets for the April 20 concert at Ben Hill Griffin Stadium in Gainesville, Florida are all gone, that means all the announced dates on Garth’s ongoing stadium trek are currently sold out.