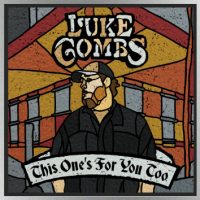 SonyJust when it seemed Luke Combs’ career couldn’t get any bigger — it did: His debut album, This One’s for You, has just been certified double platinum.

In case you’ve been living under the proverbial rock, the North Carolina native is currently topping five different Billboard charts, four of them on the strength of his current, multiple-week number one, “Beautiful Crazy.”

The other chart he’s topping is the Top Country Albums chart, where his two-million-selling debut release is now in its 27th week at number one.

As if that’s not enough to solidify the down-to-earth singer/songwriter’s stardom, his Beer Never Broke My Heart Tour also happens to be totally sold out.