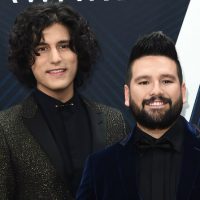 Along for the ride are what some might consider an unlikely choice for a tour mate: FGL’s frequent competitors, reigning ACM Vocal Duo of the Year Dan + Shay.  But Dan Smyers insists it’s not really an odd pairing at all.

“We’re huge fans of FGL,” he explains. “I remember when we moved to Nashville, those guys were just getting started. They’d just put out ‘Cruise’ and… It was so inspiring to us.”

“Those guys were pushing the envelope, and they exploded in a big way, and they’re still killing it…” Dan adds. “Not only is their music amazing, but they’re great friends of ours… Our wives are friends with their wives. It’s like one big family out there.”

This year, Dan says the stars just happened to align to head out with FGL.

“The timing felt right…” Dan points out. “And they hit us up, I feel like, before even the business of it happened…”

“They texted us, like ‘Yo, we should go on the road together.’ And we’re like, ‘Absolutely! Let’s do it,'” Dan recalls.

Shay Mooney is particularly stoked to be part of a diverse lineup that includes Morgan Wallen, HARDY, and Canaan Smith.

“Country music fans are for the most part just fans of music,” Shay reflects. “And I think it’s really cool to kind of throw a bunch of different artists into a pot and to be able to kind of see that all in one show.”

Once Dan + Shay finish their set, they’ll head into the audience to watch FGL.

“There’s gonna be a lot of hits played…” Dan says. “They put on such a good live show.”