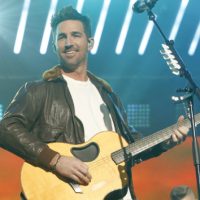 ABC/Randy HolmesIf you have a pre-teen girl in your life, you probably know who JoJo Siwa is: the singing, dancing YouTube sensation famous for her big, colorful hair bows and her stint on Dance Moms is all the rage among the younger set — including Jake Owen’s six-year-old daughter, Pearl.

In fact, the down-to-earth country star was willing to throw his celebrity around a little bit to help his firstborn out. On Wednesday, he took to his Instagram Story to give JoJo a shout-out, explaining that Pearl had tickets to see her that night at Amway Center in Orlando, Florida.

He also pointed out his six-year-old is very “proud” she has “every color” of JoJo’s bows, throwing in a low-key request to see if JoJo could “hook a brother up” and sneak Pearl into her meet-and-greet.

A short time later, Jake continued his Story with some triumphant news: “Y’all, it worked! JoJo Siwa came through. Not for me, but for Pearl!”

The Story ends with a picture of Jake’s daughter posing with her JoJo souvenirs, plus a photo of a beaming Pearl with JoJo herself. You can also spot a gap in the six-year-old’s smile, since she just lost her first tooth.

JoJo’s D.R.E.A.M. Tour continues in the U.S. through October, when she heads to the U.K. for a handful of dates.

Meanwhile, Jake’s playing fairs and festivals this summer, as he enjoys his first few months with his second daughter Paris, who was born April 29.

He just released “Homemade,” the third single from his Greetings from… Jake album.