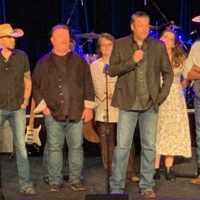 Blake Shelton, Luke Bryan and Jason Aldean were just three of the superstars who came together Tuesday at the Country Music Hall of Fame in Nashville to remember Earl Thomas Conley.

Calling the man who had twenty-two number ones in the eighties “my favorite superhero,” Blake confessed how hard it hit him when ETC passed away in April, after suffering some health problems.

“I was on my four wheeler…” Blake told reporters before the tribute. “And I just started crying. And I got on the phone with [girlfriend] Gwen [Stefani] and I said… ‘Man, I think I’m sad because I’m afraid nobody’s going to remember Earl.'”

Blake, along with other big names like John Anderson, Joe Diffie, Neal McCoy, Wade Hayes and more made sure that won’t happen, performing ETC hits like “Holding Her and Loving You,” “We Believe in Happy Endings,” and “Fire and Smoke.”

Luke performed “Once in a Blue Moon,” a song he learned from his dad.

“[He] had a Chevrolet pickup truck with a tape player, and I would say for five years, ETC’s tape never left…” Luke remembered. “When he was in his truck, that was what was playing.”

Jason covered “Nobody Falls Like a Fool,” a song he also heard growing up.

“He was such a staple on the radio back in those days…” Jason said of ETC. “All his melodies were just really catchy and heartfelt.”

Before the memorial, Luke and Blake couldn’t resist having a little fun with each other.

“I said, ‘Put me down for “What I’d Say” before Luke has a chance to pick it,'” Blake joked, after Luke gave him a mock-compliment for answering his phone to talk about the tribute.

“It’s my — by a mile — my all-time favorite country song and performance,” Blake added.