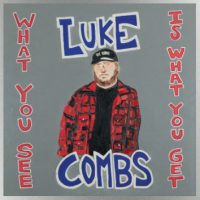 River House Artists/Columbia NashvilleYou can expect more of Luke Combs’ plain-spoken, everyman appeal on his sophomore album, judging from its title: It’s called What You See Is What You Get.

While Luke hasn’t revealed the track listing for the album, which arrives November 8, we do know it’ll have seventeen tracks, including all five songs from his The Prequel EP.

One of the new tracks is “1, 2 Many,” a new song featuring Brooks & Dunn that’s available to stream or download now. It was Luke’s reverence for the duo that set their REBOOT album in motion, and they’re now nominated for Musical Event of the Year at November’s CMA Awards for their re-recording of “Brand New Man.”

With this album, Luke will also continue his tradition of avoiding appearing directly on the cover. This One’s for You featured a stained-glass mock-up of the singer. The new one has a photo taken by David Bergman, which was then painted over by Nashville artist Rob Hendon. The result is what looks like a graffiti portrait of the North Carolina native.

Meanwhile, This One’s For You is currently spending its 47th week atop Billboard’s country albums chart, the most ever for a male artist. If he can last three more weeks, Luke will tie Shania Twain’s Come On Over for the all-time record.

“Even Though I’m Leaving,” the new single from What You See Is What You Get, is climbing the chart now. You can check out the track’s new concert video on YouTube now.