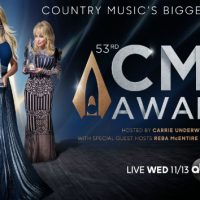 Mark Seliger/ABCWednesday night, Carrie Underwood will lead a tribute to country music’s greatest female voices, as she hosts the CMA Awards for the twelfth time, this year with legendary co-hosts Dolly Parton and Reba McEntire.

This year, the “Southbound” hitmaker also happens to be the only female nominee for the night’s top prize, Entertainer of the Year. Dolly took home the trophy in 1978, before Reba did in 1986.

While many consider Entertainer to be a touring award, Carrie believes it’s more than that.

“I personally feel like Entertainer, it’s everything, right?” the American Idol winner asks. “So I feel like people kind of narrow it down to tour, but I feel like there’s so many more components to it.”

“And, you know, I’m blessed and lucky to be nominated, obviously,” she adds, “and [in] fantastic company.”

Carrie makes no bones about it — she wants to win.

Tune in to see if Carrie can clinch the title, Wednesday as the 53rd Annual CMA Awards air live from Nashville’s Bridgestone Arena starting at 8 p.m. ET on ABC.